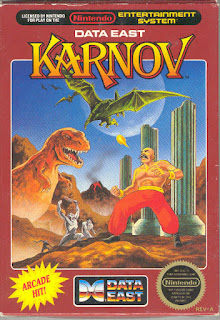 However, when you look closer, inaccuracies are revealed. First, it's a very flattering rendering of Karnov. He's nowhere near as svelte as that. In real life, he's so heavy that his walking speed is slower than any other NES hero, and he lacks even the skill to fall forward when he's in mid-air. He just goes straight down.

The box art also neglects to depict the main gameplay element of Karnov: his magic ladder. Karnov will fight a dinosaur if he has to, but his chief interest in life is climbing ladders. How else is he going to see what's on top of all those broken pillars?

And was Karnov really an "ARCADE HIT!"?