Working Out With Hulk Hogan

If you’re anything like me, there are two main obstacles to getting fit: lack of motivation and boredom with your workout routine. That’s why, in a recent bid to get my life together, I jumped into an eBay bidding war for the ultimate in exercise technology: a 1985 cassette titled “Hulkamania Workout Set 40 Minute Audio Program.” 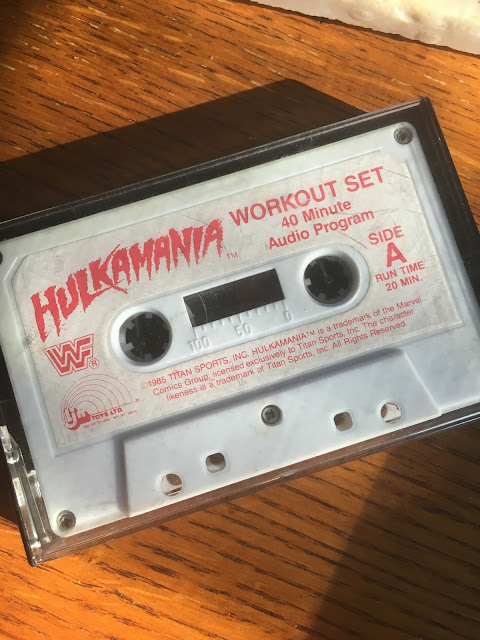 That’s right, Hulk Hogan, known worldwide for his 24-inch pythons and also for his large biceps, shared all his most effective workout secrets with the world over 30 years ago. Honestly, knowing this, it’s kind of surprising there’s even an obesity epidemic in America anymore.

$15 later, it was mine. I set it up in my living room, put some athletic gear on… and hit play.

SIDE A
Things begin with the ring of a bell and an announcement that Hulk Hogan is still the champion of the world to the sound of his original theme song, which—true fact!—was later repurposed into “Ravishing”, the second-best Bonnie Tyler song of all time. Give it a listen and just try not to slam that big nasty giant Big John Studd afterwards:

After a few bars of the tune, Hulk himself finally speaks: “Whoa whoa whoa whoa!” Apparently Hulk is recording this on a whim after a match, an impressive feat of multitasking.

The Hulkster launches immediately into a five-minute motivational speech about the benefits of exercising (including saying that he needs “good, strong tag team partners!” which seems like a bit of false advertising). We’re dealing with a very early Hogan here, one who hasn’t quite got a handle yet on all his trademark catchphrases. For example, instead of throwing out a classic “brother” at the end of all his sentences, he’s saying “Daddy” instead. Pretty off-putting. Also, he is repeatedly calling working out “hangin’ and bangin’”, which is so weird that I love it.

Ten minutes in and there’s still no sign of a workout. Instead, Hulk is going through a five-point list of workout—excuse me: hangin’ and bangin’—tips.


1. “Take it easy when you first start.” Done and done, Hulkster.
2. “Dress properly. Wear something loose and always wear sneakers.” Because I was doing this in my dining room, I was going socks only. Nobody tell Hulk, please.
3. “Make sure you have plenty of room. Don’t work out in a place where you could trip over rugs or anybody’s old sneakers!” This tip is so specific that I have to imagine Hulk once hurt himself by trying to hang and bang in a shoe closet.
4. “Pick a time to workout that is convenient for you.” AKA “I needed to come up with an extra tip to get to a nice round five in total.”
4.5 “Always wait an hour or so after a meal before you exercise.” I think that’s a swimming rule, Hulk.
5. “Workout with the help of an adult.” I had this one covered! After I bought the tape, I’d convinced my tag team partner in life for the past nine years to join me for this momentous event. However, when it was time to finally start with the hangin’ and the bangin’, she backed out, claiming she’d already been to the gym that day. Betrayal! Now I know how the Hulkster felt when Miss Elizabeth chose stay in a neutral corner during the main event of Wrestlemania V.

Finally, it’s time to get down to the nitty gritty. First: the warm-up, in which Hulk instructs me to run in place, do some jumping jacks (“Get those arms way out there!”), and then jump rope for a few minutes each. At this point, I realized that the tape was originally sold with actual hangin’ and bangin’ equipment. I would have to make do with common household objects. In this case, my common household imaginary jump rope.

Next up: stretching! The Hogan Method of Stretching involves doing three different stretches for a total of five minutes. “Do the other three tomorrow!” says Hulk, seemingly implying that there are only six total stretches in all of existence. I think stretching theory has advanced greatly over the last 30 years.

Finally, without any more pretense or instruction (which would have been helpful, as there has been not one hint of a discussion on technique on this tape so far), the Hulkster says it’s time to start hangin’ and bangin’. From this point on, the rest of the tape is mostly a musical accompaniment to your workout. Luckily, the music is great—lyric-less ‘80s rock with plenty of synths and sax solos.

And in case you’re slowing down? Every 20 or 30 seconds, the Hulkster pops in with encouraging comments! Some of my favorites: “Keep a pushin’ and a pumpin’!” “Don’t you dare give it up, man!” “Push! Push, little dude!” In a low voice: “Don’t slow dowwwwwn… the Hulkster’s watchin’ you!”

This continues until the tape just stops out of nowhere.

SIDE B
More of the same here, except that as the tape rolls on, Hulk’s comments get noticeably further and further apart. Either the Hulkster was running out of things to say, or, more likely, whoever edited the tape didn’t do their math correctly.

Then, before you can even lift an ice cream maker over your head for the 50th time, Hulk yells “BODY COOLDOWN! We’re not done until the cooldown is completed! You gotta be too cool to fool!” And there it is. The first tangible workout tip of the entire tape: If you don’t cool down after hangin’ and bangin’, you’re vulnerable to being fooled. And the best part is this: since he said it before I cooled down, I believe it, brother!
Posted by Ross! at 5:13 PM