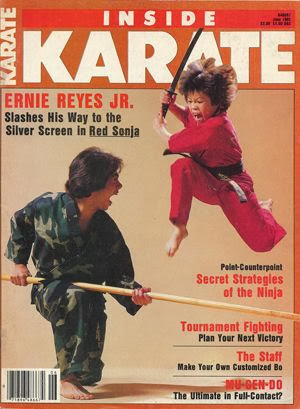 Ernie Reyes Jr. appeared on the cover of Inside Karate no fewer than four times over the course of its publication. This one makes our list, however, because it's the only cover to capture Ernie (who, as you know, went on to star in Surf Ninjas, TMNT 2: The Secret of the Ooze, and the wildly underrated The Rundown) in the midst of an attempted murder. Such a shame to get bloodstains on that sweet camouflage karate gi, though.

In honor of the most amazing Point-Counterpoint topic we've ever seen, we held our own session, which we hope lives up to high standard of IK editorial content.

Ross: Point. It's good that the Ninja have Secret Strategies. It would be very un-ninja-like for them to reveal their strategies to the world and their enemies.

Dusty: Counterpoint. Inside Karate is doing society a favor by blowing the lid off of the Secret Strategies held by the Ninjas. No longer will the world's entire population need to walk in fear of a secretly strategic ninja attack.

Ross: Point. Even if civilians learn the Secret Strategies, what good will it do them? The Ninja have perfected them for years! Let me give you an example: Dragon Sound keyboardist Jim learned all about secret ninja strategies from his bandmates. But his knowledge didn't save him from immediately getting chopped in the back with a katana when the chips were down.

Dusty: Counterpoint. The members of Dragon Sound followed the discipline of Tae Kwon Do and knew very little of ninja activities or techniques, which is the reason that Keyboard Jim received a devastating katana back chop. Perhaps they should have been reading Inside Karate instead of hanging out at home doing homework.

Ross: Point. Publishing an expose on the Secret Strategies must have put the editorial staff of Inside Karate at severe risk of a ninja attack. Maybe the magazine was never actually cancelled. Maybe the entire staff just died in a mysterious shuriken accident.

Dusty: Counterpoint. The entire editorial staff at Inside Karate is actually comprised of ninja warriors. By publishing a false list of secret ninja strategies, they have lured the unsuspecting public in a false sense of security. Also there is no such thing as a shuriken "accident" when ninjas are involved.

Ross: Point. I can't argue with any of that. You win.

Think you can do better? Study the cover archive here and show us your moves!
Posted by Ross! at 12:30 PM