Our recent post featuring the Punisher socking a polar bear in the jaw got us thinking: How many more super heroes have run afoul of the world's biggest species of bear, and what could possibly inspire them to attack an animal that's been listed as a vulnerable species––likely to become endangered––by the International Union for Conservation of Nature?

As you'll see, some don't understand the dire situation that polar bears face, some want to test their mettle against the largest land carnivore in the world, and some just want to get their hands on a warm pelt. 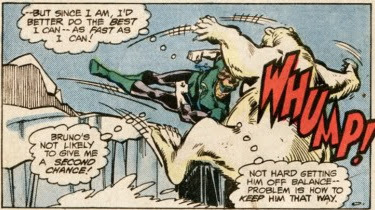 Rather than punch the bear in the face like Wildcat or use his power ring to create a giant fist to punch the bear in the face––thank god polar bears aren't yellow!––Green Lantern has chosen the classic flying shoulder tackle maneuver as his means of assault. It's an appropriately bold maneuver for the one DC super hero that's supposedly fearless. Of course, in this case, fear could be a useful feeling, since it would inspire the Lantern to attack the polar bear from afar instead of getting within range of its deadly claws.

Interestingly, this polar bear seems to have a name: Bruno. It's unknown whether he was some sort of hyper-intelligent super bear in the vein of a Gorilla Grodd or Monsieur Mallah or Ultra-Humanite (note to self: this blog needs a ongoing feature about talking gorillas), or if Green Lantern simply prefers to humanize everything he destroys by naming it first.
Posted by Ross! at 5:27 PM