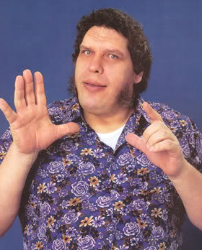 January 1983: Andre the Giant has come to town! Normally, foreigners (especially a Frenchman!) would be booed out of the Dallas Sportatorium, but who could hate Andre? At this point, he had been a beloved figure in the world of wrestling for over a decade, and he's rocking a swanky polyester suit in his mostly incomprehensible backstage interview with neckbearded announcer Bill Mercer.

For the special occasion of an Andre appearance, the main event is something unique: a six-man elimination match. Competitors can be eliminated by pinfall, submission and disqualification, as well as by throwing them over the top rope, battle royal style. The competitors: Andre, Kerry von Erich (fresh off his championship-costing betrayal at the hands of the Freebirds last week), eminently hatable "man-child" Bugsy McGraw, Freebird Terry Gordy, Duluth, Minn. native Wild Bill Irwin, and King Kong Bundy.

The small WCCW ring looks comedically childish with Andre in there. The top rope barely comes up to his waist, and I keep worrying that he's going to lose his balance and take a bad spill to the floor.

Bugsy and Kerry (whose unbridled fury at the Freebirds gets him disqualified) are eliminated quickly. Meanwhile, Andre endears himself further to the Texas crowd by spending the entire match choking out Gordy. And when I say the entire match, I mean it. He literally has his hands wrapped around Gordy's neck for 10 straight minutes while the other two bad guys ineffectively try to loosen his grasp. After a while, it just gets uncomfortable. Stop it, Andre! He's already dead!

Eventually, Michael Hayes comes out to ringside to harass everyone––this is Michael Hayes's role in life––and Andre steps out of the ring (over the top rope, as he knows no other way, of course) to chase Hayes, eliminating himself.

So much for that 15-year unbeaten steak they advertised at WrestleMania III!
Posted by Ross! at 3:49 PM