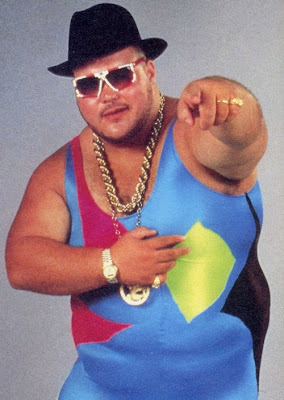 When 1991 WCW fans heard the signature cry of "YO BABY YO BABY YO," they knew a couple of things were about to happen. First, they'd be treated to a rap by 400-pound, braided rat-tailed, neon spandex-wearing wrestler P.N. News. And second, they'd be reminded of how News stole the cadence of his signature rap from the far superior "Ninja Rap" by Vanilla Ice from Teenage Mutant Ninja Turtles II: The Secret of the Ooze.

A self-proclaimed "rapmaster," News never revealed where he did his post-graduate rap studies, and, unfortunately, opponents like Stunning Steve Austin and the One-Man Gang never pushed for answers, so the true story of News' rap tutelage may be lost to time.

One can question his educational background, but one can't accuse News hoarding all the raps for himself. He often lent his flow––which flowed at the speed of a glacier, but flowed nonetheless––to WCW's marketing efforts, as evidenced by this semi-enthusiastic jam about the upcoming Bash at the Beach pay-per-view.