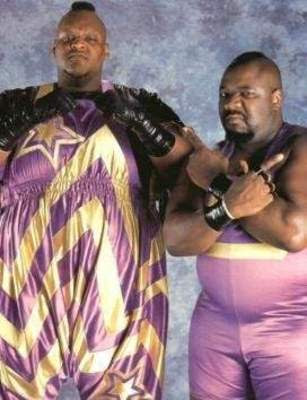 In 1993, there were two big problems in the world: urban decay and the fact that the WWF tag team titles were held by the Quebecers. Then Men on a Mission arrived.

Their mission? Bring the belts back to the U.S., and make a positive impact on urban youth. They accomplished their second objective by hanging around in the city and blending in by wearing the splashy purple and gold spandex clothing that early '90s urban youth are best remembered for. Meanwhile, their hype man Oscar would speak in the language of the city: rap.

Unfortunately, instead of discussing the problems of gang violence, truancy, or drug use, most of Oscar's verses merely established the names of the M.O.M., reiterated their correct spelling, and reinforced that names that rhymed with their names were incorrect.

A year or two later, Men on a Mission's connection to the street was downplayed after Mabel discovered his regal heritage and began billing himself as King Mabel. It was the day the rap died. With no positive message left to spread, Oscar was laid off. Mo was knighted for his service to the crown.