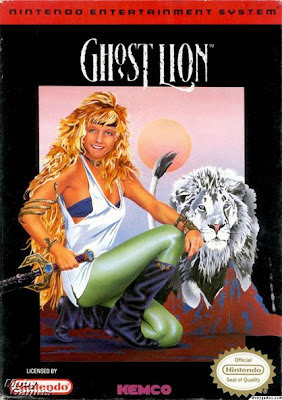 This box art is amazing. Look at those skin-tight green pants, the off-puttingly photo-realistic face, that feathered hair and the loose tank top borrowed from Sting in the Robocop video we posted the other day. (Also I'd bet that her strapless blue bra was added in later after someone in upper management saw this and decided it was too incredible for the eyes of children!)

This art makes you think you're going to play as a badass '80s glam rock groupie or maybe a performer in a spectacular Vegas show. And look how tall she is! Those mountains don't even reach the top of her boots!

Instead, Ghost Lion is just a Dragon Warrior ripoff in which you play as a normal-sized, adolescent Maude Flanders lookalike named Maria whose parents were lost forever after riding what looks to be a log flume.

The box art makes the Maria look pretty capable, right? She could hold her own in a fight, especially if it was against critics of Def Leppard's Hysteria album. In the game, though, Maria is just such a pansy. She has "Courage Points" instead of hit points, she wears a headband she bought at Claire's in the mall, she visits the town of Bread (where they can't afford to buy bread!), and even when you try to get her to use her spear, a crazy tribal woman named Moja jumps out of it and does all the work for her.

Unfortunately, the legendary white ghost lion is not your partner and you can't make him do tricks. He is the final boss and after you beat him, he turns into an old man and gives Maria a necklace. Creepy. Then you wake up and realize it was all a dream!