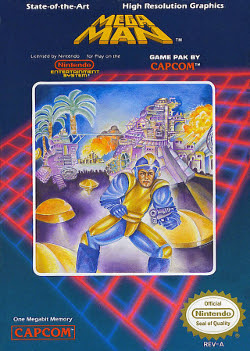 Could there be any other choice? This "State-of-the-Art" airbrushed nightmare is legendary for its insanity.

For one thing, it turns Mega Man from a cute blue robot to a grumpy, bow-legged old man in the bizarre skin-tight-in-some-spots-and-puffy-in-others clothing that seems to have only ever been in fashion on the covers of NES games. This unsettling character is placed into an environment that can only be described as a neon horrorscape, completely separate from the actual game's non-threatening future-industrial look. Are those Corn Pops floating in the solid purple ground? Who can say. Thinking about it too hard is like looking into the many eyes of Cthulhu. Madness is guaranteed.

When you throw in the fact that Mega Man's fanciful cannon arm has been replaced by a realistic-looking, high-caliber handgun from the streets of Baltimore, it becomes clear that it's entirely possible that whoever Capcom commissioned to create this cover art never even saw the game and instead used the opportunity to expose the innocent children of the '80s to the twisted landscape of his inner psyche.