Point-Counterpoint: How Would You Fix SAVAGE? 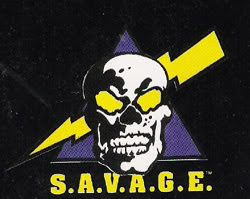 Then you've got SAVAGE. Led by General Warhawk alongside Sergeant Havoc, Gripper, Nomad, and others, SAVAGE has never even come close to succeeding in any of their operations and, if we're being honest, has never even had one plot that makes the tiniest lick of sense. Sure, the level of competition they're facing is a lot higher than that of their contemporaries. John Rambo is an unstoppable juggernaut of martial competence and down-home, redwhiteandblue-blooded American common sense. But SAVAGE's schemes could be foiled by the Scooby Doo gang.

In this Point-Counterpoint, we will explore the most sensible solutions for bailing out the sinking ship that is SAVAGE and getting things back on track from an organizational perspective.

Ross: Point. There are a lot of problems with SAVAGE, but the most prominent, in my opinion, is that the economics of their schemes make absolutely no sense. Why dig a hole beneath the Washington Monument to threaten to hide it unless your $10 million ransom demand is met? The underground excavation had to have cost at least that much already. The entire project is going to be in the red even if it's successful! Also: Why threaten international landmarks with the goal of raising $50 million to get an International School for Terrorism off the ground? That's not long-term thinking, that's spending on a personal vanity project that's not going to pay any dividends to shareholders for at least four years (if it's a classic university-style institution) or even longer (if they're taking it in more of a post-graduate direction). Examples like these are why I'm going to have to say that the quickest way to clean up this organization is to hire an experienced financial planner. Make a budget and follow it to the decimal.

Dusty: Counterpoint. Agree the schemes make no economic sense but I feel that the fix is more complex than a mere budgeting exercise. SAVAGE needs to invest in some personal development for its employees. Perhaps SAVAGE should spend some money on getting General Warhawk an MBA and he can then focus on financial leadership. Perhaps Gripper, Nomad and the others should at least get associate's degrees. An educated workforce is a more productive workforce! Hell, even some project management certifications would go a long way in SAVAGE. First step for General Warhawk after gaining his MBA: write a mission statement for SAVAGE and stick to it. If the mission is to inject chaos into the world then so be it, but don't go making schemes to collect paltry ransoms if your end goal is pure chaos. Get that mission statement straight, Warhawk, and use it to guide the leadership of your organization.

Ross: Point. Sure, investing in your workforce is important, we can't deny that. But there also have to be consequences for failure. Gripper has bungled everything he's ever touched with his flesh hand and everything he's ever clutched in his claw hand. This is a man who inexplicably tipped over a forklift he was driving when he was just feet away from escaping with printing plates for American currency. At some point, he simply must be put on a Performance Improvement Plan if not outright fired or reassigned to non-mission-critical duties. Yes, a claw hand is a gnarly accoutrement for any evildoer. But this is—or should be—a results-driven endeavor, and while he's got the look, he's just not producing. Is SAVAGE even organized enough from a human resources perspective to make this happen?

Dusty: Counterpoint. You place an employee with a disability on a PIP for failing a task due to his disability and you are signing up for a lawsuit. Let's face facts: Gripper is employed because SAVAGE needs to retain employees with disabilities. Moving on. Perhaps SAVAGE should consider de-centralizing its management and instead of a top down command style place more of the creative plan hatching on the lower level employees. Maybe, just maybe, if the lower-level grunts had more of a hand in the forming of the schemes they would feel a greater sense of ownership and pride therefore be more conscious of their actions and do less bungling.

Ross: Point. I can see that you're coming at this from a very populist, labor-centric viewpoint, and I respect that.

Dusty: Counterpoint. I just want to know what SAVAGE wants more. Do they want to kill Rambo, make money, rule a country/world, or just cause general chaos? It's not clear and that is very frustrating. If they can just settle on one of the objectives and focus all resources on that I think they will start to see some positive results.

Ross: Point. Couldn't agree more with you there, and I'm going to go one step further and say that until they accomplish it, their sole focus should be the destruction of Rambo. Rambo is the lynchpin of all their failures. Without Rambo in the picture, there's a lot more leeway for absurd schemes and under-qualified employees.

Dusty: Counterpoint. I can't argue against your logic on the previous point. That's right, the forces behind Point-Counterpoint are in complete agreement on this one. Therefore, General Warhawk should hold an organization-wide town hall meeting to deliver the new mission statement. The SAVAGE mission statement reads: Murder Rambo. That's it. Simple and direct. With focused and relentless pursuit I have no doubt they will wear Rambo down and it won't be long before he makes a mistake, allowing SAVAGE to fulfill the mission.

Beware, John Rambo, once General Warhawk graduates with his M.B.A., your days are numbered.
Posted by Ross! at 6:22 PM