Rambo, KAT and Turbo are driving the attack jeep, hurtling toward the gates of the Death Merchant's sizable, booby-trap-filled palatial rural estate. This is possibly the best way to open any episode of any TV show, and also the second booby-trap-filled palatial rural estate that the Force of Freedom has stormed in the last three episodes. They soon encounter their first booby trap when the wrought-iron gates to the mansion grounds rotate 90 degrees toward them and fire the spikes off the top of their bars. "Now I know why he's called the Death Merchant!" KAT exclaims, indicating that maybe they were planning to attack this guy for no reason.

The second booby trap, another round of spikes shot from an underground launcher, takes out the attack jeep (NO!), leaving Rambo and company charging the mansion on foot alongside a previously unseen ninja clad entirely in white. This appears to be the inauspicious debut of White Dragon, my most-anticipated new Force of Freedom member.

He quickly makes his presence felt by joining in on a cooperative team strike to explode the door to the Death Merchant's mansion: Rambo throws a grenade, Turbo launches helmet rockets, KAT shoots her uzis, and White Dragon shoots one single-hand crossbow bolt. Thanks for contributing, White Dragon!

Inside the mansion, the team is soon set upon by some very non-threatening-looking robots.

Rambo melts them with a flamethrower, then uses it to heat up the door knobs to an unbearable temperature in the Death Merchant's control room so he can't escape. The Death Merchant turns out to be an old skinny bald guy with glasses and jacket with poofy shoulders like Snow White's dress. Not very threatening.

The Force of Freedom chooses to bring him into custody by riding a commuter train back to civilization.

SAVAGE is on a nearby ledge, Sgt. Havoc leveling a rocket launcher toward the slowly moving train. "Kill the Force of Freedom!" Warhawk exhorts him. "But don't hurt the Death Merchant!" They're sitting right next to each other! General Warhawk has unreasonable expectations. And also—AGAIN—stunningly misplaced priorities. Maybe they could just blow up everyone and find another Death Merchant someday. If you're in charge of SAVAGE, your number-one goal should always be to kill Rambo, full stop. Nuke that train from orbit. Drop one of your many stolen submarines on it. I don't care, just don't handcuff your mildly competent subordinates by asking them to make an impossible rocket launcher shot.

Luckily, Havoc improvises with the classic villain tactic of getting what you want by putting innocents at risk. He uncouples some of the train cars—which inexplicably go hurtling in the other direction on flat ground—allowing him to rescue D.M. while Rambo uses a convenient nearby jetpack to save the commuters. 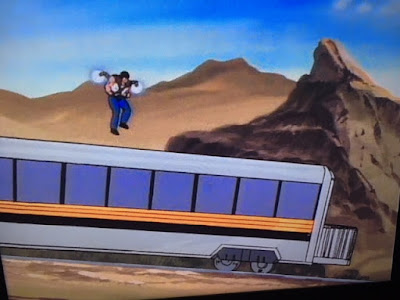 Rambo and company then track SAVAGE to Egypt, where they wander around town trying to find them by showing civilians posed studio photos of all the bad guys!

Sure enough, one of the citizens is a secret traitor, and the battle is on. SAVAGE is more dangerous and encumbered than ever, with each team member wearing enormous, bulky backpacks created by the Death Merchant, which give them access to one extra weapon apiece.

In the midst of battle, Rambo unleashes a special move he calls "the old melon trick": opening the back gate of a melon cart, releasing a tidal wave of melons onto the ground that causes his enemies slip and fall.