In Throwing the Controller, we look back at the most infuriating enemies, levels and screwovers in NES history.


One of the most ambitious early NES games, The Karate Kid takes players on an exciting journey through the events of the first two movies.

The first of the game's four stages recreates the All Valley Under 18 Karate Tournament that Daniel LaRusso wins at the end of the first movie. Sadly, there is no boss fight against Sensei John Kreese, making Rambo the only video game to ever feature an enemy portrayed by your god and mine, Martin Kove.

The game's remaining three stages detail Daniel and Mr. Miyagi's journey to Okinawa. Stage three in particular recreates the memorable typhoon that strikes the island just as the bad blood between Miyagi and Sato comes to a boil.

Despite his months of intense karate training under Mr. Miyagi, Daniel finds the weather to be more powerful than Johnny, Tommy, Bobby, Jimmy and Dutch combined. He can't even stand still in the face of the gale force winds––the wind continuously pushes him backwards. That would only be an annoyance, except the level contains tons of tricky platform jumps over the deadly Okinawan water.

Excuse me: the normal Okinawan water. Too bad Mrs. LaRusso didn't spring for swimming lessons in addition to those martial arts ones. Making matters worse, helpless birds and flying sticks are constantly flying right at face level. It's almost as if Mother Nature herself has joined the Cobra Kai. 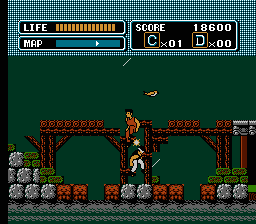 If you believe this game, the wind is Daniel's most dangerous opponent ever.

Karate Kid is probably most fondly remembered for its three mini-games of skill. Recreating famous training scenes from the movies, these hidden bonus scenarios give the player a chance to earn extra uses of the famous Miyagi Dojo special attacks: the crane kick and the drum punch.

Don't expect to earn any rewards if you're randomly dropped into the swinging hammer game, though. It's incredibly tough to time your jumps in order to avoid the pendulum-like hammer that comes at Daniel faster and faster. Here's the kicker, though-–jumping doesn't even count! You're actually supposed to be pushing the A button just before the hammer smashes you. The timing to do so is even more strict, so much so that I usually just give up immediately and accept Daniel's fate of gruesome blunt force trauma.

With the benefit of hindsight, we're certain that the developers should've replaced this unbeatable level with a deck-sanding mini-game, a car-waxing mini-game, a fence-painting mini-game or, even better, a shower curtain costume-wearing mini-game.
Posted by Ross! at 3:31 PM