Last fall, gamers everywhere were saddened by Ars Technica's report that Nintendo was ceasing publication of the venerable Nintendo Power magazine after more than 20 years of hard-hitting, unbiased Nintendo coverage. 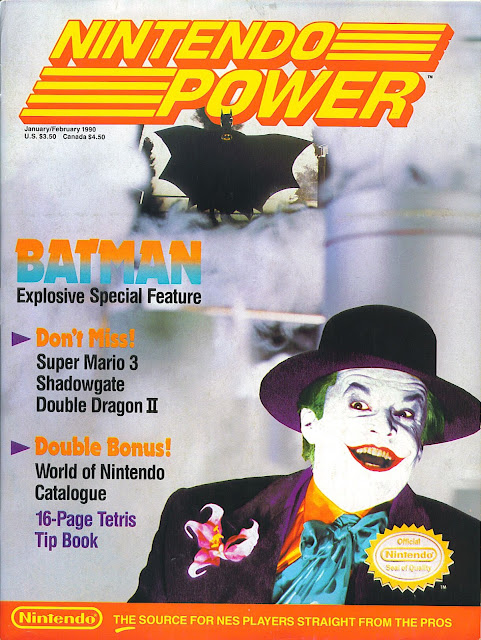 This cover didn't quite crack the top five, because even though we all have fond memories of Jack Nicholson's Joker and it's totally badass that Batman is swinging from the P in the magazine's logo (or is that just a gap in the smoke? Hard to tell), a cover featuring official art from a game––or movie, in this case––simply can't top the glorious use of everyday dudes in video costumes we see on the publication's best covers.

But this cover still has a lot going for it. For one thing, all that smoke. This is the smokiest cover in video game magazine history. I'd think Batman was squealing the Batmobile's tires and doing donuts in the foyer of Axis Chemicals if he wasn't right up there batwalking around on that catwalk.

Then there's the fact that it looks like the Joker is wearing an over-sized Official Nintendo Seal of Quality lapel pin. We would kill for one of those.

Then there are the coverlines. When's the last time a magazine commanded you to read about Shadowgate? Probably not recent enough, if you're anything like us. Also, it's hard to believe a magazine could plug Double Dragon II and also boast of a "Double Bonus!" and not have those two things be connected in any way.

Finally, the thing that really makes this cover: "16-Page Tetris Tip Book." How can there possibly be that many tips for Tetris? Is it just the sentence "Don't let the blocks reach the top of the screen or you will lose yet again!" with one word on each page?
Posted by Ross! at 4:37 PM