Sometimes video game box art is so completely badass that it demands you purchase the game even though you may have never heard of the title or even play video games at all! Only these boxes have earned the right to be honored with the title of Badass Box Art of the Week! 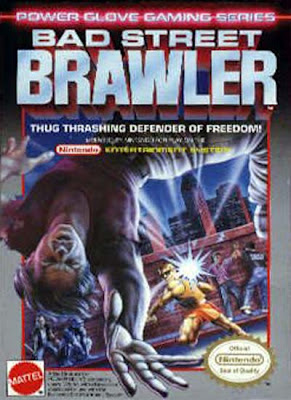 In the 1980s, Mattel became a giant in the badass action figure market by releasing the He-Man and Bravestarr toy lines. But they also released some very questionable toys that threatened to tarnish their badass reputation. Please keep in mind that the below pictures are actual toys released in the 1980s by Mattel.
So with a transforming pencil sharpener techno-jet and a muscly armed stack of flapjacks poised to destroy the badass empire Mattel was constructing in the 1980s, the legendary toy company decided to lay to rest all questions of its badness by releasing Bad Street Brawler. As the second and final entry into the Power Glove gaming series, Bad Street took gaming to new heights, allowing players to thrash thugs with the ultimate badass NES accessory. From the looks of that common street thug flying through the air, I doubt he will be threatening anyone's freedom any longer to wear cut-off muscle shirts and extremely tiny gym shorts.