Are You Band Enough? Music Reviews: Stan Bush's The Ultimate: Track 7: "Thunder in Your Heart" 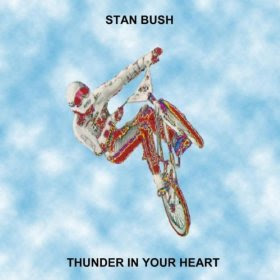 "Thunder in Your Heart" finds Stan Bush in his purest form: Inspiring you rise up and do your best with lyrics that make you feel like you're probably his best friend (if only!). It also brings us closer than ever to Stan himself, because it proves he loves the same music as we do. You see, "Thunder in Your Heart" is a John Farnham cover. It was originally recorded to be the showcase track of the classic 1986 BMX movie RAD.

Don't anybody tell Farnham we said this, but Stan's version of this song is superior to the original. Sure, he's doesn't take many risks with the arrangement (tough to improve upon perfection there), but the instrumentation is cleaner and the world just plain needs this song more now than it did in 1986, when such inspirational jams were in high supply.

Following is an in-no-way-comprehensive list of additional songs we hope Stan covers someday:


"No Easy Way Out" by Robert Tepper
"Break the Ice" by John Farnham
"Sweetest Victory" by Mark Torien
"Iron Eagle (Never Say Die)" by King Kobra
"Winner Takes All" by Sammy Hagar
"Burning Heart" by Survivor
"You're the Best Around" by Joe "Bean" Espisito
"Push It to the Limit" by Paul Engemann
"Far From Over" by Frank Stallone
"Peace in Our Life" by Frank Stallone, but definitely no other Frank Stallone songs
"Talking to the Wall" by Dan Hartman
"One Track Lover" by Matt Berry
The theme song from M.A.S.K.
"The Last Stand" by Doug Kahan
"Stand in the Fire" by Mickey Thomas
"Never" by Moving Pictures
"Heartbeat" by Red 7
"Hearts on Fire" by John Cafferty
"Staring Down the Demons" by Animotion
"Through The Fire" by Larry Greene
"Crossing Over" by Dennis Churchill
"Survive" by Deco
"New Hero" by Dear Enemy
"No Guts No Glory" by Steve Overland (or a team-up re-record where they name the supergroup "Overland Bush")
"Flesh on Fire" by James House
"Thicke of the Night" by Alan Thicke
"Fire & Ice" by Marietta
"Real American" by Rick Derringer, although the original will never be topped
"Heartbeat" by Don Johnson
"Best of the Best" by Stubblefield & Hall
"Champion" by Vicki St. Elmo
"One Dream" by Lou Gramm
"In Time" by Robbie Robb
"Balls in the Air" by David Schwartz

And if you like any of this stuff, do yourself a favor and find and listen to the Blood Bros. mixes.
Posted by Ross! at 5:00 PM