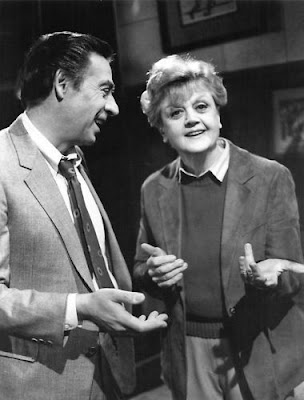 This eventful episode sees Jessica finally come under suspicion of committing a murder (after an old friend's dead body tumbles out of an antique armoire at an auction). However, her high moral character is vouched for by Jerry Orbach, returning as private dick Harry McGraw for the first time since season one, and the word of a hard-boiled NYC detective is all it takes for the cranky Boston PD to clear Fletcher of suspicion in the case.

Later, Harry slips Jess a mickey so he can read a secret diary she found hidden inside an ornate chessboard. Then he goes on a bad date with another one of the murder suspects: "I ain't never hit a dame, but you're asking to be number one!" he tells her.
Posted by Ross! at 4:18 PM