Call them ham 'n eggers, call them jobbers, or call them "wimpy guys," like we did when we were kids. Just don't call them winners.

The world of '80s and '90s pro wrestling was filled with matches in which accomplished superstars would pound the crap out of losers. In The Worst Wrestlers Ever, we shine the spotlight on the grapplers who just plain weren't any good. 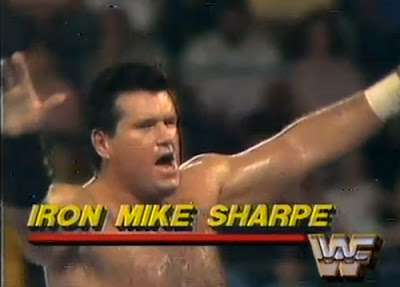 Iron Mike Sharpe was that rarest of the rare: a bad guy loser. Most prelim wrestlers are generic, plucky go-getters that try to endear themselves to the crowd so that they can get a cheer by leapfrogging Mr. Perfect once or twice before they get demolished and humiliated.

Not Iron Mike. His grossly hairy body and wordless bellowing served only to make wrestling crowds of the '80s beg for good guys like the Big Bossman and Jake "The Snake" Roberts to shut him up as quickly as possible.

Where could a man like this come from? Some quick research confirms that this brute does indeed hail from the wilds of Canada. We can only assume he was let through customs at the border because it's illegal to detain grizzly bears.

Then again, a wrestling grizzly bear would certainly be far more popular than Iron Mike Sharpe.

Sharpe's in-ring style was simple and incredible ineffective. He mostly just lumbered around the ring like a stop-motion tyrannosaurus rex from a 1950s movie serial. His main offensive maneuver consisted of charging headlong at his opponent after telegraphing his intentions for three seconds like the first boss of a Nintendo game, then yelling at the referee and the crowd when things didn't turn out as he intended.

Check out this match against "Birdman" Koko B. Ware, and listen to Gorilla Monsoon and Bobby Heenan discuss Sharpe's prospects for stardom.


Although he never won a match in the WWF, Sharpe shockingly found slightly more success (in that he found himself in a high-profile match) in the Far East, where he even once teamed up with Hulk Hogan to form an early version of the Mega Powers in order to do battle with some Japanese wrestlers––including the legendary Antonio Inoki!––on their home turf. Mike took the loss, of course.
Posted by Ross! at 4:41 PM