Last month, gamers everywhere were saddened by Ars Technica's report that Nintendo was ceasing publication of the venerable Nintendo Power magazine after more than 20 years of hard-hitting, unbiased Nintendo coverage. 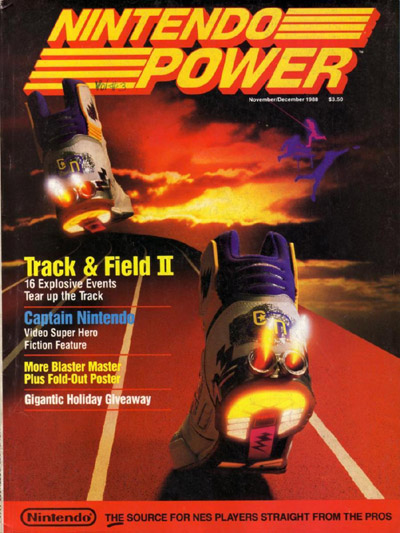 When I got this issue in the mail as a kid, I was excited. The original Track & Field wasn't my cup of tea. Those sorts of competitions were never as exciting as other sports, like football or baseball, and anyway, the gameplay always boiled down to hitting one button as quickly as possible, so that got old real quick.

But track and field events with rocket shoes? That's something I could get into, and it's exactly what this cover was promising. Foot races would be much more fun if every competitor had radical nuclear hi-tops strapped to their feet while running on a track IN THE SKY! And if a simple race was that exciting in Track & Field II, imagine the badass spins the game must put on other events.  Shotput grenades? Long jumping over shark tanks? Lightsaber javenlins? The possibilities were endless! The coverline promise of "16 Explosive Events" only bolstered my assumptions about the game's content.

Unfortunately, the terrible reality of the situation is that Track & Field II is just more earthly track and field action. Nowhere in the entire game are rocket shoes to be found.

Upon closer inspection, the "CN" logo on the hi-tops reveals them to be connected to the Captain Nintendo "Video Game Super Hero Fiction Feature," which, to be fair, I recall being an awesome prose story about a regular dude having to fight video game enemies––such as Mother Brain from Metroid––that invaded our reality. It was sort of the inverse of Captain N: The Game Master.

In the end, I can't help but think of this cover as a missed opportunity. Consider all the awesome video game footwear they could have put on the cover instead: