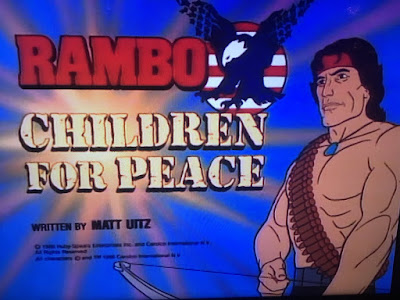 With a title like that, your expectations get set at maximum. The good news? With a hero like Rambo, you're guaranteed an episode that'll exceed those hopes.

For starters, Rambo is taking a working vacation to Sydney, Australia, where he's keeping a watchful eye over the proceedings at the Children's Peace Conference at the legendary Opera House.

SAVAGE, having a direct philosophical opposition to the discussions, decides to crash the party. The best way to do so? Send in Black Dragon in one of his patented unexpected forms of transportation!

One thing leads to another, and we eventually reach the only possible endpoint of this scenario:

This smoothly transitions into a knife-vs.-sword duel with Black Dragon, who eventually beats a hasty retreat.

The peace conference now over, Rambo decides to give all six kids, who represent no fewer than five different continents, a ride home in his plane at the same time. That's going to be a long ride if you're the last one to get dropped off. SAVAGE, pissed that the conference was such a huge success, shoot the plane down and leave Rambo playing babysitter to a bunch of mock government nerds in the middle of the African wilderness. The American kid is especially obnoxious, always trying to get the others to drink water without boiling it, amongst other survival faux pas.

After Rambo chooses the wrong moment to try to cross a fallen log, he's separated from the kids and must climb up a rope to ascend a chasm. That's when he runs into some unexpected traffic.

His problems don't stop even after he's reunited with the children—he's immediately challenged to a fight by the chieftain of a local baboon tribe.

After protracted battle, Rambo throws the baboon into a pit of quicksand and then rescues it, earning the respect of the tribe and forging and unbreakable bond between man and beast.

They then team up to fight SAVAGE.