Top 5 Arcade Characters We Want the Rock to Portray Next: #5: Dig Dug

The announcement of Dwayne "The Rock" Johnson's latest film project, an adaptation of the classic arcade game Rampage, has us excited. The news that Johnson would merely be playing a normal human battling against these monsters lowered our hype just a bit, but we're still holding out hope that the twist at the end of the movie is that he'll grow to massive size to do battle on their level. If you thought Jason Statham taking a Rock Bottom through a coffee table in Furious 7 was awesome, just imagine a giant werewolf getting hit with a La Magistral Cradle in the middle of Cleveland. Where can I buy tickets??

To celebrate the Rock's continued cinematic success, here's our humble list of the next classic arcade game characters he should portray. Coming in at number five: Dig Dug! For years, we've been trying to fan-cast the Dig Dug movie adaptation of our dreams, but it's been impossible. The problem: Taizo Hori, "Hero of the Dig Dug Incident," (that's his real name, look it up) is a character whose only offensive move is to jab a hose inside a monster and inflate that enemy until it explodes. It's a gruesome style of attack that should have given greater concern to the parents of the '80s. More concerningly, to effectively force that much air into a living being using only a what looks to be a manual bike tire pump must require an unfathomable amount of upper body strength, more than any actor could believably display.

But have you seen the Rock lately? Dude is stacked.


Bonus: Depending on which game art you look at, this is also a bold race-blind casting choice. 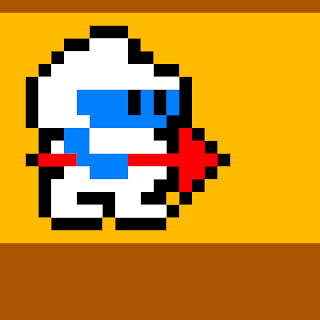 Will Atari fanboys protest, demanding a blue-skinned actor for the role? We can only hope so.
Posted by Ross! at 2:49 PM