This Is a Real Comic Book Character: Paste Pot Pete

A brilliant chemist, Peter Petruski aimed to eclipse Michael Jackson as the most famous resident of Gary, Indiana. When he invented a new multi-polymer adhesive liquid, his ticket to the big-time was punched. However, as the insane tend to do, he chose to try to forge a criminal career with his new invention rather than make a fortune patenting and licensing it. Thus was born Paste Pot Pete. 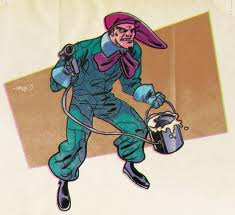 Donning a green smock, a jaunty purple beret and an oversized ribbon tie, Pete made plans for his first criminal caper: he was going to steal a new experimental missile from the U.S. military and presumably sell it to the reds.

That's when Pete learned a terrible truth: Glue doesn't help you steal things. "Sticky fingers" is just a saying he had taken too literally. He had to beat a hasty retreat via motorcycle. It would be the first of many professional embarrassments.


Paste Pot Pete's professional embarrassments have only been matched by his fashion embarrassments. After realizing his original outfit made him look more like a colorblind industrial pastry chef––or an angry French toddler––than a terrifying super criminal, he designed a more utilitarian costume. 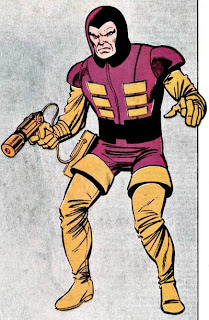 Unfortunately, no one told him that cuffed yellow thigh-highs have an extremely low intimidation factor. Yet somehow his slightly improved appearance earned him a spot in the Frightful Four, a super villain team clearly in desperate need of a fourth member.

Over the years, Paste Pot Pete has enjoyed one of the lowest batting averages of any super criminal, being beaten by everyone from Spider-Man to Daredevil to even the Prowler.

In a desperate bid to get his groove back, Pete changed his name to the Trapster and altered his costume to try to look more like a ninja.