The Worst Wrestlers Ever: Reno Riggins

Call them ham 'n eggers, call them jobbers, or call them "wimpy guys," like we did when we were kids. Just don't call them winners.

The world of '80s and '90s pro wrestling was filled with matches in which accomplished superstars would pound the crap out of losers. In The Worst Wrestlers Ever, we shine the spotlight on the grapplers who just plain weren't any good. 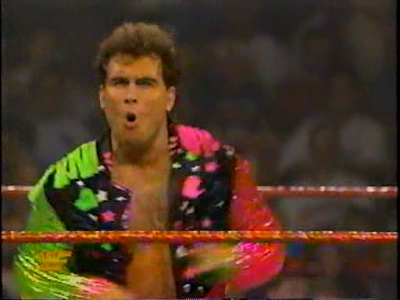 With his bushy mullet and lack of offensive firepower, one might first mistake Reno Riggins for the legendary Dale Wolfe. However, upon closer inspection, the two couldn't be more different. For one thing, Riggins had a flashy fashion sense (see above photo) on par with the likes of Koko B. Ware or Marty Jannetty.

Neon jacket over plum tights? Riggins obviously didn't spend any more time selecting his wardrobe than he did learning how not to perform any offensive maneuvers during a match.

His clash of styles with Rick "The Model" Martel, who, as befit his second career, favored a more restrained cardigan-and-sunglasses look, led to an epic confrontation in which Martel dominated while Vince McMahon and Jesse Ventura debated the finer points of Harvard fashion.

The other difference between Reno Riggins and Dale Wolfe? Dale is a down-home country boy, but Riggins is an intellectual. 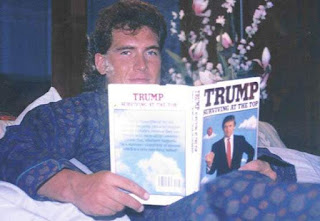 Perhaps seeing how Ted DiBiase's friendship with Donald Trump paid dividends for the Million-Dollar Man's WWF career, Riggins took it upon himself to read Trump's beloved 1990 tome of business secrets, Surviving at the Top, while wearing a fancy robe.

Unfortunately for Reno, this was a case of putting the cart before the horse––he would have been better served reading a book called Getting to the Top in the First Place or Coming to Terms With Your Place at the Bottom.
Posted by Ross! at 2:53 PM